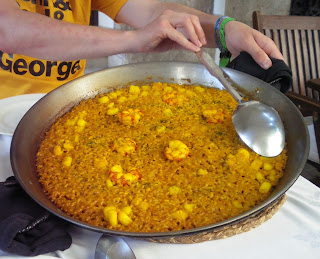 Until this summer I had never travelled to Valencia, but there were a few things on my bucket list for the city that I couldn't ignore and right at the top was paella. Obviously food can be entirely evocative of a place and knowing that this rice and fish dish originated in Valencia I wanted to try one and have the ultimate paella experience.

No pressure then! In order to try and minimise the risk of the outcome of this exercise being disappointment, a paella recommendation was needed. Luckily, the receptionist at our hotel was forthcoming and highlighted a few reliable establishments in various parts of the city. As we wanted to head down to the City of Arts and Sciences we decided to check out an area she recommended just off the former riverbed, which has been transformed into a beautiful park.

Despite there being a small cluster of restaurants scrawled on the map in biro by our friendly receptionist, each one we came to was closed. This is a common problem in Spain during the summer months, when many establishments shut up shop for a few weeks for staff holidays. It was getting late in the day for lunch when we finally found Raco del Turia and the welcoming sight of lights and people inside. It was coming to the end of their lunch service, but they were happy for us to order and we took our seats outside on the pavement. 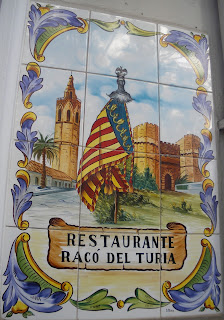 Eating paella in Valencia is not something to be rushed and while our huge pan of the speciality was being prepared, we enjoyed some smaller dishes, including squid and a delicious salad. When the steaming dish arrived, it was a vision of bright yellow with the seafood distributed across the top. What amazed me was how thin the layer of rice was, allowing it to be cooked evenly over a massive surface area.

From a selection of paellas on the menu we went for paella de mariscos - prawns, cuttlefish and monkfish and it was delicious. The rice and fish were both cooked perfectly and it was quite unlike anything I have ever had before, despite loving all of the ingredients that ended up on my plate. The bright yellow comes from the all-important saffron, which is a much more delicate flavour than its intense hue would suggest.

Safe to say that the paella experience lived up to expectations. So much so I bought a paella pan from a hardware store we walked past the following day. Despite saying it serves two, it was a fraction of the size of the one our authentic paella was brought to us in at Raco del Turia, but that is probably a good thing as I wouldn't have been able to slide it down the back of my rucksack quite so easily if it had been larger! I look forward to plenty of paella suppers at home to evoke leisurely lunchtimes in Valencia.
Posted by Barefoot Em at 09:51 No comments: