Oxfam stewarding is a great way to do a festival 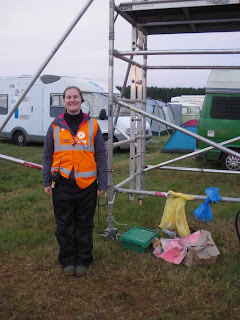 When an earthquake shook Nepal just weeks after my parents returned from visiting the country, the importance of international charities really struck home. Many people they had met were affected by the situation and many will not see their lives return to normal for a long time.

One way that charities, such as Oxfam, can raise money is by providing stewards for music festivals in the UK. They are given the equivalent of an hourly minimum wage for the work their volunteers do and these helpers get to experience a festival while doing good at the same time.

Pops and I are big music fans and festival veterans, so this year decided to offer our services up to Oxfam and volunteered for Womad. It turned out to be a great decision, leading us to meet some wonderful people and have a truly positive stewarding experience. 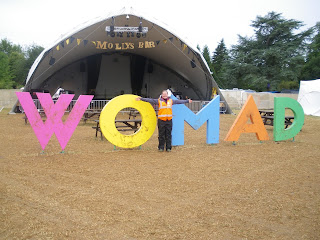 How do you get a picture of the Womad sign with nobody else around?
Do it at 7am after a night shift

Having never stewarded before and not attended Womad either, the whole thing was new to us, but we were welcomed into the stewarding fold and quickly felt at home. One of the nicest things about stewarding is that Oxfam has its own campsite and you are immediately surrounded by friendly faces. Not only this, but there is a marquee where you can sit and chat to fellow volunteers, showers and onsite catering, which was provided at Womad by Nuts. 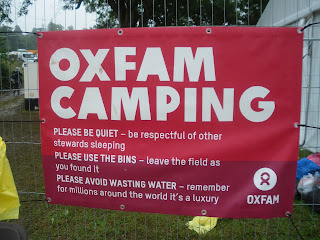 The Oxfam campsite has a very special atmosphere

We were all told in advance to bring our own crockery and cutlery, as disposable items such as these would not be provided. Nuts piled up our plates with huge mounds of delicious food at much cheaper prices than those that could be found in the arena. Each steward is given a food voucher for every shift they do, which also helps to keep the workforce going, with hearty falafels and masses of salads for me and steak and chips for Pops. 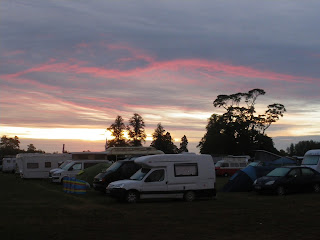 Stewarding a festival is not the same as simply attending one as a punter and eight-hour shifts should not be entered into lightly. The benefits of experiencing a festival in this manner far outweigh the hard work, however, with some small and large perks coming as part of the bargain. It is really nice for example, to be able to explore the site before the customers arrive; to recognise the faces of the people you wristbanded in the rain, now that the sun is shining; and to make lots of friends with fellow volunteers.

In return for working the festival, Oxfam stewards get to see some of the acts, without having to buy a ticket. Not knowing what shifts we would be given in advance, we didn't manage to see Count Drachma or Aurelio, but we did get to see the likes of Souad Massi and a Kathkali performance. You certainly can't grumble about that. 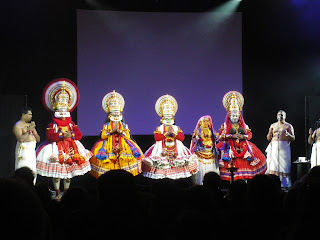 Kathkali performers from Kerala in The Big Red Tent

The weather at this year's Womad has seen it dubbed by many as Womud, but luckily Pops and I were prepared. We spent a very soggy eight-hour day shift wristbanding people in the rain, as we were decked out in wellies, overtrousers and waterproof coats. No matter whatever the weather, Oxfam stewards soldier on and we all got through it together. A sign went up in the Oxfam marquee saying that anyone flooded out of their tents could sleep in there, although it appeared nobody needed to make use of the invitation.

It is also almost impossible not to remain vigilant while not on shift and help the public even when not wearing your Oxfam tabbard. Not only did Pops and I help when we spotted someone who had fallen in the mud, but I gave directions to people who were lost and generally got involved at every opportunity.

On leaving Womad, we said goodbye to the friends we had made in the Oxfam campsite and started to head off towards the car. One of the main organisers of stewards at Womad thanked us for our help, which echoed an attitude that was felt throughout the whole festival, with those in charge being very communicable and appreciative of the time people had donated.

Make a difference - steward for Oxfam

There were 400 Oxfam stewards at this year's Womad festival, making some £70,000 for the charity. During the summer festival season in the UK, Oxfam makes more than £1 million through stewarding. This is a huge amount for just three shifts per person. To find out more, visit the Oxfam stewarding website. 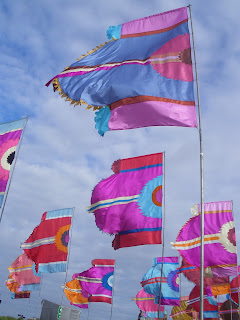 I too worked at Womad as I have done for many years with Oxfam. I applaud how well wrtten your blog is. Stwarding should not be taken lightly as we are the face of Oxfam whilst working. I was shocked at the committment given by some stewards at Womad this year. Some of were lazy and even found it an inconvenience when it rained! Having said that those of you that did take it seriously worked bloody hard, well done you deserve it said!

Thank you for your comment Christine. The rain did make it tougher, but everyone we met was dedicated to the cause and those who we saw go home early, did so after finishing their shifts. We were rewarded with the sun coming out for Mahmoud Ahmed on Sunday. I hope you enjoyed working Womad despite the rain.

Excellent blog! You and Pops are my kind of people and I hope you will steward at WOMAD again. I've been there many times as a steward, sometimes with my daughter too.

Great blog and full of common sense. Speaking as someone who has stewarded at Womad before for Oxfam (and Glasto twice) recently but who went as a 'punter' this year with other families and children, I can say it was a tough festival due to two days of solid rain, albeit with a warm sunny day in between. One wet day can be recovered from but two needs survival techniques which rule out most families (and some stewards perhaps?) On a positive note, if you didn't enjoy the experience, it can only be better next time - that amount of rain was seriously unlucky. Next time - make sure you have good wellies, waterproof trousers, a good raincoat AND a poncho and an umbrella for walks (if not duties and watching performances) and a good hat/hood. The secret is actually *not* to get wet in the first place ;)Oh and a good supply of red wine helps too...(though not on duty)!

Thanks for your kind words Graham and Kirsten. Good preparation is always key. Pops and I have been to both dry and wet festivals, but we always bring the wellies whatever the forecast. There is no way I could have survived that wet shift without my overtrousers. Spirits remained high and a great Womad was had by us both.